The Delachaux Group
contemplates a listing in Paris

Paris, 17 April 2018 – The Delachaux Group, a global player in mission-critical engineered solutions in technology-intensive strategic markets, announced today that it expects to list on Euronext Paris by the end of 2018 in order to accelerate the Company’s growth and development. Following the transaction, the Delachaux family would remain the majority shareholder in the long term.

Founded in 1902, the Delachaux Group designs and manufactures high value-added products, systems and services critical to the safety, reliability and efficiency of its customers’ equipment and infrastructure. The Delachaux Group mainly serves the rail infrastructure, port, aeronautics, logistics and mining sectors. It has developed an undisputed know-how and renowned innovation capabilities. The Delachaux Group is the world leader in its markets through leading brands, such as Pandrol, Conductix Wampfler and DCX Chrome.

The Delachaux Group’s global and local operating model provides strong support to its clients. Operating in more than 35 countries, the Delachaux Group’s 3000 employees are able to be very responsive at a local level. Its Research and Development centres and market experts offer their clients a global vision and an expertise grounded in the sharing of best practices. This decentralized and collaborative management approach allows the Delachaux Group to have an in-depth knowledge of the value chain, as well as of the commercial, technological and regulatory environment in which the Group operates.

Since 2011, when funds advised by CVC Capital Partners invested in the Company, the Delachaux Group has strengthened its positioning by optimizing its portfolio of brands and activities, stabilising the operational profile of its activities and making its business model even more flexible.

The Delachaux Group’s development is driven by its exposure to end markets which benefit from structural growth trends such as investments in infrastructure, green mobility, energy efficiency and industry 4.0.

The Delachaux Group's growth strategy relies notably on consolidating its position in its key markets, maintaining its investments in innovation and conducting a targeted M&A strategy to strengthen its technological and geographical leadership.

Since 1997, the Delachaux Group has recorded a strong performance and its revenues have multiplied by five reaching €841 million in 2017, with a large recurring share coming from maintenance activities. Adjusted EBIT (current operating income) and adjusted EBIT margin of the Delachaux Group reached €112 million and 13.3% respectively in 2017.

Thanks to this performance and its consolidated position, the Delachaux Group is now contemplating a listing on Euronext Paris. This transaction, which remains subject to market conditions, would enable the Delachaux Group to accelerate its development, strengthen its financial structure and pursue its profitable growth trajectory. 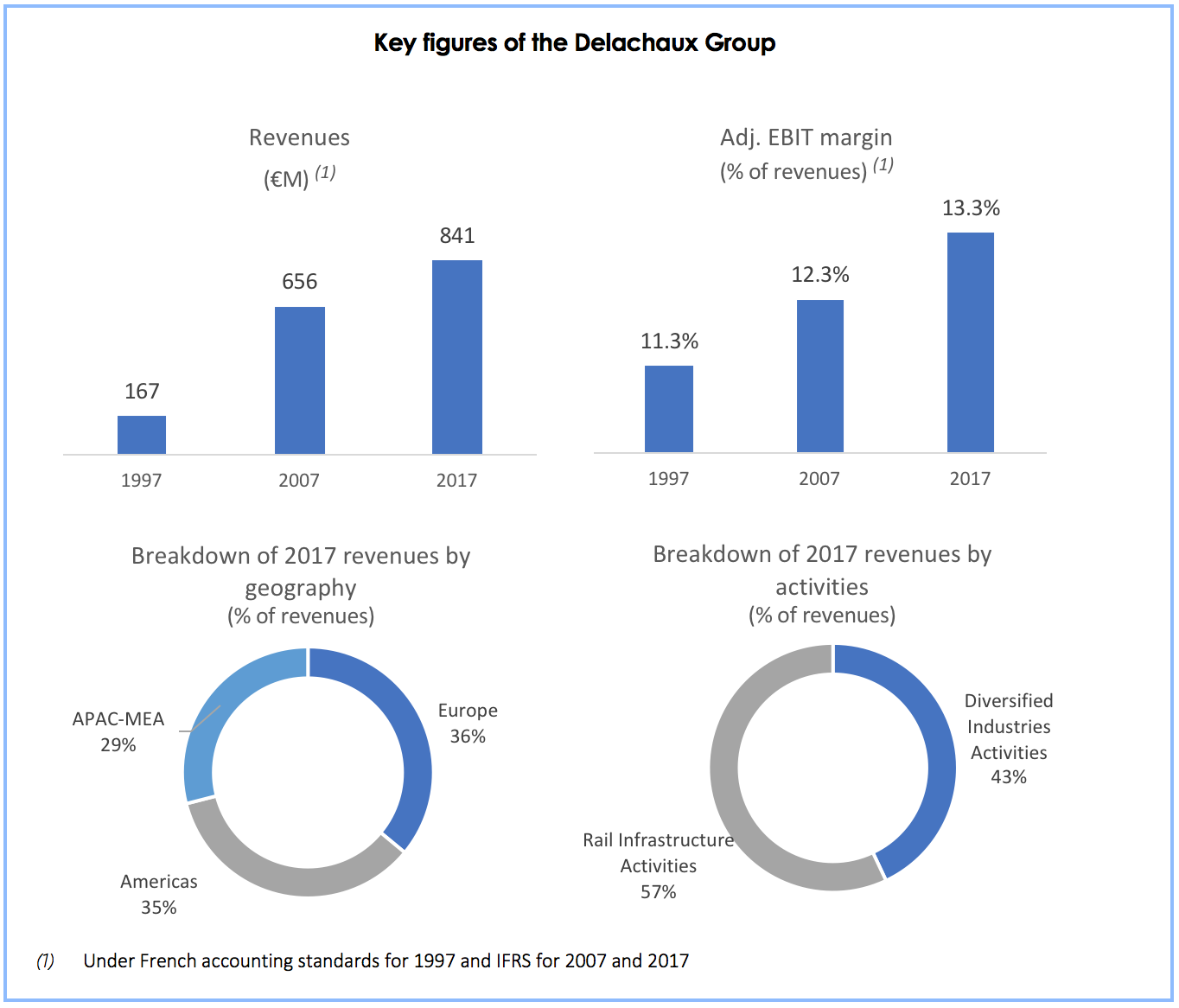 About the Delachaux Group

The Delachaux Group is a global player in mission-critical engineered solutions. The Delachaux teams’ commitment and know-how reflect their passion for their customers’ businesses. The Delachaux Group provides solutions to half of the world’s railways, two thirds of the world’s seaports and half of the planes flying. Family-owned company created in 1902, the Delachaux Group generated revenues of €841 million in 2017. It employs now more than 3000 people in more than 35 countries with the aim to “give the best of Delachaux everywhere”. Present in strategic markets, the Group’s brands Pandrol (Rail Infrastructure), Conductix-Wampfler (Energy & Data Management Systems) and DCX Chrome (Chromium Metal) are recognized global leaders for their reliability, expertise and innovation capabilities.

Disclaimer
This press release does not constitute or form a part of any offer or solicitation to purchase or subscribe for securities in France, the United Kingdom, the United States of America, Canada, Australia, Japan or any other jurisdiction. No communication and no information in respect of this press release or of the Group may be distributed to the public in any jurisdiction where a registration or approval is required. No steps have been or will be taken in any jurisdiction (other than France) where such steps would be required. An offer of securities in France would only be made after the delivery by the Autorité des Marchés Financiers of a visa on the corresponding prospectus.

This announcement is not a prospectus within the meaning of Directive 2003/71/EC of the European Parliament at the Council of November 4th, 2003.